'Ali Nazik' Is One Of Turkish Cuisine's Best Kebabs 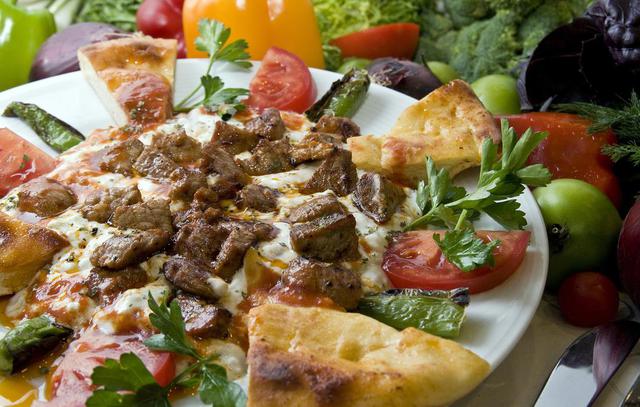 If you're a fan of Turkish kebabs, you'll be sure to adore this beloved dish from the southeastern region of Turkey, near the city of Gaziantep. It's called 'ali nazik' kebab, and its name and history are just as enticing as its ingredients. This dish is basically made of tender, juicy, bite-sized pieces of lamb in a seasoned butter sauce served on top of hot eggplant and yogurt mash. Its utter deliciousness is a given. What makes it even more fun is the name. In modern Turkish, 'Ali' is a male name, and 'nazik' means 'thoughtful' or 'polite.' Before I learned the real story, I actually thought the dish got its name from a very polite man named Ali who came up with the dish. I was happy to learn the real story, as it's much more exciting. Apparently, Yavuz Sultan Selim, a powerful Ottoman sultan, went on an excursion to Gaziantep back in the 16th century. He was greeted with ritual, fanfare and, of course, food. This succulent lamb over eggplant and yogurt was presented to him. He was so impressed, we wanted to know what 'gentle hands' (eli nazik), created the dish. The name stuck ever since. The best place to enjoy authentic 'ali nazik' is in a fine Turkish restaurant. If you want to try making it at home, try this recipe for authentic Turkish 'ali nazik' kebab.