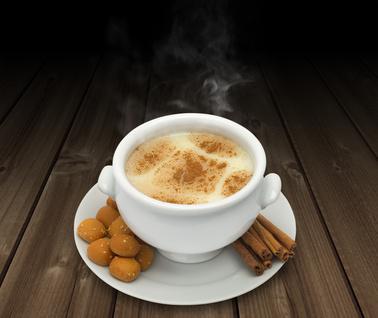 If you love the warm, fuzzy feeling of sipping on a mug of steaming hot chocolate on a cold winter’s day, you have to try ‘salep’ (sah-LEP’). ‘Salep’ is a hot beverage famous in Turkey that’s made with milk and sugar and thickened with, believe it or not, a powder made from the tubers of the wild orchid flower.

‘Salep’ is popular during the winter and it’s no wonder. Once the sweet milk is thick and rich, it’s poured into mugs and sprinkled with generous amounts of cinnamon. The cinnamon aroma and flavor combined with the slightly earthy taste of the ‘salep’ flour makes this tummy warmer irresistable.

‘Salep’ has been present in Turkish cuisine for centuries and is found throughout the Balkans, Middle East and even in parts of Europe and Russia. In Turkey, it’s said that ‘salep’ even made its way into British tea rooms during the 17th and 18th centuries.

Today, ‘salep’ has become so popular that it’s consumption has threatened the wild orchid populations that were once abundant all over the country. For this reason, the export of authentic ‘salep’ is now restricted by the Turkish government. As a result, modern versions of prepackaged ‘salep’ have popped up on supermarket shelves in recent years.

Much like packets of hot chocolate mix, these ready mixes contain other starches like wheat or rice starch. They are are easy to prepare. All you have to do is add hot milk or water. You can find ‘sahep’ at markets selling Greek, Turkish and Middle Eastern foods and on websites selling Turkish food.

Try a hot, steaming mug of ‘salep’ instead of hot chocolate this winter and warm your insides the Turkish way.